I had been itching to bird for quite some time now, but admittedly was feeling too tired (and yes, too lazy) to go out. The burnt out teacher in me always won, and with Djop out on field for the next few weeks, I simply stayed at home. But my lucky birding stars wouldn't allow that so when I got an invitation from Sir Chin on Sunday to go birding in Infanta, Quezon on Wednesday, I said yes!

After some coordination, we were on the road to Infanta at 4AM on Wednesday and headed to the Marilaque (short for Marikina-Rizal-Laguna-Quezon) Highway, also referred to as the Infanta Road. We met up with fellow birders Homer and Brian who were already parked and scanning for birds.

We stood by the roadside, in front of a big hagimit tree. It was my first time to really become aware of this tree and I really did not know much about it except that birds flocked to feed on its fruits.
The hagimit we were looking at had huge branches where remnants of fruits could be seen. Were we too late? Had all the fruits been eaten up?! We were entertained by some Tawny Grassbirds and a few Philippine Bulbuls but no others birds showed up. It was quite early though, so we decided to move along the highway and search for a more birdier site.

We discovered a lot of hagimit trees in different stages of fruiting. Some had riper fruits, while others had lots of brown, unripe fruits which had huge potential to be the birds' feeding ground in the next days. I learned later that those fruit-laden branches are called tubercles and that the hagimit is a close relative of another fig, the tibig, and they both indicate the presence of fresh water nearby.

We decided to head back to our original location and were happy to see more friends in the area. We also learned that behind the huge hagimit was a smaller one with still-ripe fruits! We joined George & Manette, Sir Wins, Sir Ed, Sir Conrad, and new friend Sir Rod in the small clearing and waited for the birds to show. Sir Fidel joined us after a short while.

A handsome Guaiabero was very evidently enjoying its breakfast of hagimit figs as we settled into our positions, its bright green plumage both blending and standing out (does that make sense?)


Suddenly a much bigger bird landed on the clump of fruits! My heart skipped a beat when I saw what it was: Amethyst Brown-Dove! Lifer! I've been wanting to see this bird since I started birding and as I approach my 8th birding birthday in April, I finally see it! It crawled near the Guaiabero, and started feeding on the fruits.

It stayed quite a while, eating beside the Guaiabero while flowerpeckers flitted in and out of the branches. Finally, it had its fill of fruits and it flew to a higher perch deeper into the trees where it rested for a few minutes, bathing in the morning sun.

We were waiting for the Philippine Fairy Bluebird to show, and it did! But only for a couple of seconds before it flew off again. It would call loudly from the surrounding trees but did not show.
The Olive-backed Flowerpecker made a few more appearances but always very quick and mostly on the branches above us. I managed a few shots of this very skittish bird!

The Amethyst Brown-Dove also made a repeat appearance, this time coming out into the open to feed. It was such a pretty bird to observe, it's colors very muted and pastel!

It was nearing lunch time when the dove finally flew off again and we also decided to head towards the small chapel and have a lunch break as well.


After lunch, it was back on the road and in search of more birds. We stopped at another fruiting hagimit tree (there were so many along the road now that I was aware of what they looked like!) Aside from the usual flowerpeckers, there were no other birds, so we decided to just go back to our original site. We were boarding our cars when Sir Conrad approached us and showed us a photo he just took of a dove! Possibly a Cream-bellied Fruit-Dove! He was shown the bird by a friendly local, Francis. We all quickly moved to the area Francis was pointing to and he showed us the bird. It turned out to be a Yellow-breasted Fruit-dove, my second lifer of the trip! We had to squat, kneel, crouch to get clearer views of the bird, but it stayed partially hidden behind branches and leaves.


We moved back to our original site and also checked out an area where Manette spotted a Philippine Trogon earlier that day. We didn't see it that afternoon though. We drove along and stopped by another hagimit tree along the road. It held a small flock of Sulfur-billed Nuthatches, Yellowish White-eyes, and even a White-eared Brown-Dove. A Rufous-bellied Eagle also thermalled above us for a few seconds before disappearing behind the mountain. It was past four by then and Sir Chin and I said our goodbyes to the rest of the group when the bird activity died down.


It was a great day to go birding! The weather was perfect and I got two beautiful lifers, which I honestly did not expect to see. It was a day well-spent with good company, though I wish Djop had been able to join us. I guess that only means one thing: there will definitely be a next time! ;)
at March 31, 2018 1 comment:
Email ThisBlogThis!Share to TwitterShare to FacebookShare to Pinterest
Labels: Amethyst Brown Dove, Infanta

A year after I last joined Arne's waterbird survey in Manila Bay, I found myself back in the Atlag fish port in Malolos, Bulacan, boarding a small motorized banca, and heading out to the bay. This was my third time to participate in Arne's survey and for this trip I was with Arne, Tinggay, and Harry.

The count officially started as we sped through the river heading out to Barangay Pamarawan. Egrets and terns were flying around us, out to get their first meal of the day, and night herons were flying overhead heading home to roost.


We stopped at 8 different sites that day and some sites held quite a number of birds. There were some though that looked like a good spot to see lots of birds but sadly were empty of them. The fishing pens reliably had birds perched on the bamboo poles holding the nets together.


Our first stop was on a little "island" in Barangay Pulo-Pulo. There were good sightings there though quite far. We saw Whimbrels, Little Terns, and three Chinese Egrets among other waders.

After counting the area, we headed back out the bay and stopped at a place the boatmen called "Capiz Beach" in Bambang. The water was too shallow so Arne and I transferred to the paddle boat and headed to the beach to check for birds. We found almost none...


As we transferred to our next stop, the fish pens and exposed rocks served as additional "sites" with Greater Crested Terns, Black-headed Gulls, Pacific Golden Plovers, and Ruddy Turnstones.


The gems of the trip, for me at least, were the salt pans we visited. Aside from it being my first time to see actual salt pans, it was waders galore!!! 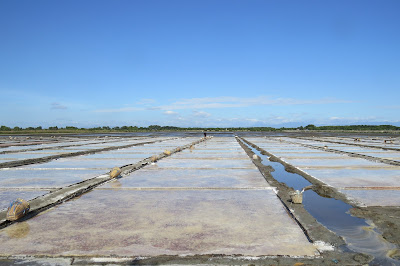 We spotted a huge congregation of waders in the inner, empty plots of land so we went for a closer look and found a big group of 68 Far Eastern Curlews! There were also lots of Lesser Sand Plovers, Kentish Plovers, Pacific Golden Plovers, and Red-necked Stints. Another treat for me was seeing Curlew Sandpipers. It has been awhile since I last saw them!


We finished counting at around 5PM, and we sped back, wet and tired, to the fish port in Atlag. We had a total count of 6,127 birds for the day. Not bad and especially since we were able to stumble upon that big flock of Far Eastern Curlews! I'm grateful to have played a small role in this endevor and I can't wait to read the final report on this project and see the results of Arne's efforts 😊 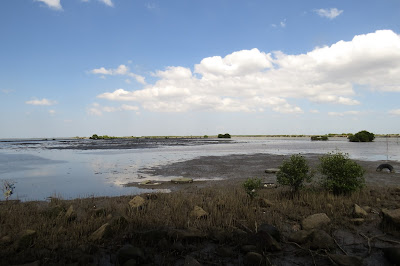