During my first few months as a birder, I would sneak solo birding trips in nearby places before heading off to work. I feel very lucky to live near green places like UP Diliman and Ninoy Aquino Parks and Wildlife which are just 5-10 minute drives away from my home (sans traffic). But, as my schedule got fuller and fuller, these solo birding trips became rarer.

Today, I found myself with a free morning. It was a perfect opportunity for a solo birding trip and since I was beginning to feel overwhelmed with so many things, I needed some place and something to clear my mind. I needed to bird.
I got in my car and drove to the nearest green, quiet and possibly birdy place I knew: the Beta Way in UP Diliman. Plus, it's free. And it was where I fell in love with the Oriental Cuckoo =) 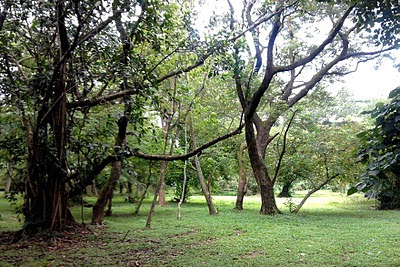 As soon as I stepped onto the path, I was greeted by a flock of 20 or so Lowland White-eyes flying from one tree to another. Their noisy chirping made me smile as I headed towards the middle portion of the path. The weather was so pleasant this morning! It was just the right amount of cloudy and the wind was blowing soft and cool from time to time. 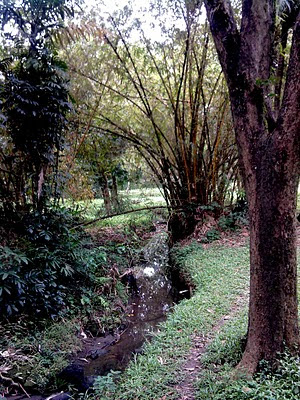 It was nice and green on both sides of the walkway and the water running through the small stream (or creek? or canal?) was surprisingly free of garbage.
I was enjoying the cheerful singing and hopping around of a couple of Golden-bellied Flyeaters before they were chased away by a Brown Shrike! I looked around the area and saw at least 4 of them calling loudly in the area, hunting in the overgrown grass and perching proudly in their newly-marked territories. No wonder I just heard the Pied Fantail from a distance. A shrike had taken over its usual spot in the bamboos!
By this time, my gasps and chuckles were making the students passing through either curious or scared of me. Some would look up at the spot I was staring at and would look back at me while walking just a bit faster away.
After almost an hour watching the shrikes, plus a Philippine Pygmy Woodpecker and a couple of chubby White-collared Kingfishers, I decided it was time for me to go. The wind had stopped and it was getting a bit hot. My mind was clear, my new birding notebook written on. I was re-energized and no longer feeling overwhelmed. I found some peace when I was just standing quietly in the middle of the trees and grass and wind and bird song. And then the UP Ikot passed noisily by and signaled my return to the real world.
Til my next solo birding side-trip.
at September 16, 2011 No comments:
Email ThisBlogThis!Share to TwitterShare to FacebookShare to Pinterest

As we walked up the path, I couldn't help but smile. We were back in the park for another quickie twitching trip. Just a few weeks back, Jops and I twitched the Red-bellied Pitta and now we were back for another bird: the Ashy Ground-Thrush.

We had received a text from good birder friends about the thrush and other species that they saw in the park recently: Red-bellied Pittas, Hooded Pittas and Mangrove Blue Flycatchers (a possible lifer for me too!) So, after guiding a group of high school students in the Ninoy Aquino Parks and Wildlife last Friday and then guiding a group of college students at the Coastal Lagoon last Saturday, we decided at the last minute (i.e. minutes before midnight) that we would give in and twitch for a couple of hours on Sunday. After all, the park was less than 30 minutes from home.

We walked as if on a mission, just slowing down in the area where we first saw the Grey-backed Tailorbirds, briefly pausing at the spot where we first saw the Red-bellied Pittas and trudged on toward the place where the Thrush was sighted. As soon as we reached the area, we both fell silent and started scanning the ground on both sides of the path. Almost instantly, I saw something hop! Something red! We squatted and immediately saw the Red-bellied Pitta, its red and blues a sight to behold. Hopping into view were two immature pittas and once they "regrouped," hopped away deeper into the brush. Admittedly, that sighting would have made my day. Seriously!

We waited some more and decided to scan two separate areas of the path. I decided to squat down and scan the ground at that level while Jops stood at the other end of the path, just a couple of meters from where I was "perched." I could see him from the corner of my eye, standing, then squatting, looking this way and that, at the ground, at the treetops. We were surrounded by calls of Tailorbirds and Orioles, when I suddenly heard him whispering my name harshly. I looked at him and he was standing as still as a statue. "What!?" I mouthed. He pursed his lips in response, pointing to the ground just in front of him. "Pitta" he whispered. I trained my binoculars to the area his lips were pointing at. I almost lost my balance and fell on my behind! It was the Ashy Ground-Thrush!!! I looked at him and whisper-shouted: "It's not a Pitta!!! It's the thrush!!!" He jerked his bins to his eyes and when I saw his jaw drop, I knew he saw it too.


The Ashy Ground-Thrush has such beautiful speckles on its breast going down to its belly. Even the markings on its face and head are wonderful to look at. It looked like it was "attacking" something on the ground and after a while it was pulling something sticky and stringy. I can only assume it broke open a snail and was eating its soft flesh right before my eyes. It stayed eating in the area for a good five minutes before some bikers flushed it away. I was ecstatic! I never imagined I would be seeing this bird and here it was... hopping away just a few feet in front of me!

We spent some time in the area but it didn't come back. Neither did the Pitta family. So we decided to bird around and I was able to see my first Mangrove Blue Flycatcher! Yay! Two lifers in under two hours! (God bless Adri and Trinket! And Tere and Alex too!)

After walking around a small area, we decided we really had to go back home. As we passed the Thrush area, we saw some movement near a big tree! I focused my bins and saw it was a Pied Fantail on the ground. I started to walk on but I almost bumped into my usually hyper companion who was very still again, looking into his bins at the same spot I looked at. "It's not a Fantail! It's the Thrush!" I looked again and, there just a few inches beside the Fantail, was an Ashy Ground-Thrush with its mouth full of worms. After a couple of minutes (and probably because its mouth could no longer hold any more worms), the bird flew away. I had to look up to the heavens and say a short prayer of thanks: two Thrushes, two lifers and the hyper boy standing still?! It was a memorable day indeed!