Birding with My Ears

When guiding new birdwatchers, I always say that birding involves not only our sense of sight but our sense of hearing as well; that in birding we both open our eyes and our ears. I guess I never really understood and appreciated the concept until I met Aga.

Born Mark Joseph Casidsid, he was nicknamed Aga because he was born two months too soon ("aga" means early in Filipino.) He was diagnosed with an eye disease that affects premature babies which meant that he would completely lose his eyesight as he got older. This happened before he turned 20 years old... I can only imagine how he felt, but after some time, he was able to pick himself up and got involved in running. This path brought him to join marathons and to his application to join the UP Mountaineers (UPM.) (Read more about Aga here.)

Part of the UPM's activities for its applicants is a birdwalk, usually in the UP Diliman campus. Birder friend and UPM member Fredd asked if I could volunteer and help guide Aga during the birdwalk. Admittedly, at first I was unsure... how could I guide a person with visual impairment on a birding trip? I closed my eyes and tried to visualize how I could do it. After a few minutes, I told Fredd to count me in.

Djop and I met up with the rest of the WBCP volunteers and the UPM at their tamabayan in UP and we were soon off to bird! I introduced myself to Aga and Gabo, Aga's running coach and navigator, and we followed Prop Jerry, our group's lead guide. 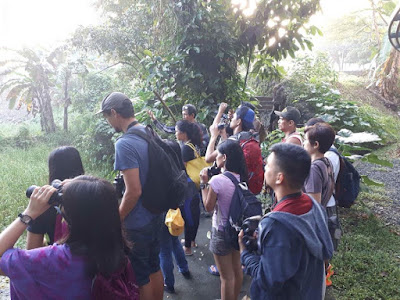 I brought out my iPod and earphones which I loaded with the calls of the birds commonly seen in UP: Yellow-vented Bulbul, Black-naped Oriole, Philippine Pygmy Woodpecker, Colasisi, Golden-bellied Gerygone, Lowland White-eye, Pied Triller, Philippine Pied Fantail, Brown Shrike, and other birds. I would let Aga listen to the bird call of the particular bird the group was looking at so he was still actively involved in the experience. Most of the time though, the birds themselves sang live 😊 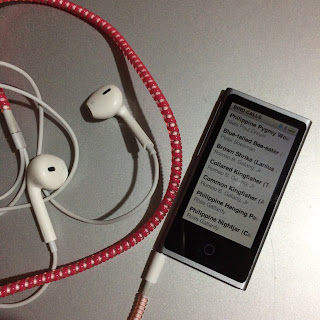 The birds really did not disappoint! Even the flowerpeckers were out and calling as they fed on some mistletoe, to be joined by Olive-backed Sunbirds. Aga's sense of hearing was very keen and he could easily determine where the sounds were coming from. His recall of the different bird calls and their names was also amazing.

I almost forgot about my binoculars because I had become so focused on listening. Suddenly, I could hear even faraway gerygones and sunbirds and I would discuss them with Aga. Many times, Aga would ask me about a bird call he was hearing and I had to keep still before I could pick out the sound among all the other noise around me.

Our group spent some time in front of the Marine Science Institute when a Colasisi/Philippine Hanging Parrot perched on a high tree and called noisily. It gave both a great visual and auditory show! Soon, we were walking back to the UPM tambayan. We took some group photos and chatted a bit about the bird walk. The applicants had a tree walk lined up next and the birders had to go.

It was a unique experience for me, focusing on sound more than the visual. It's easy to take for granted all other things when we are too busy looking and looking. That bird walk was different. Suddenly, visuals were not enough. When we encountered a bird, I silently willed it to call and sing so Aga could experience its presence.

It was an honor to have met such a brave and determined person. I taught him the birds he was hearing, and he taught me another level of appreciation for them. He taught me a new way to really experience and appreciate them. I hope you continue to go birding, Aga! And I hope to go birding with you again soon 😊

PS I wrote an article for the WBCP's online newsletter about 10 common urban birds and I included some bird calls in the article. Read it here.
at October 28, 2017 No comments:
Email ThisBlogThis!Share to TwitterShare to FacebookShare to Pinterest

It was our third and last day in Coron and Djop and I were excited with what we would find in the half-day we had before our flight back to Manila. We checked out of Darayonan at 5:30am and were on the road with Ninong Chin to bird in the Yulo King Ranch (YKR.)

The landscape changed when we entered the 40,000-hectare ranch. Both sides of the road were green with grazing land and Slender-billed Crows flew around and perched on the roadside fences.

We were hoping for another sighting of the Changeable Hawk Eagle that we spotted shortly after we arrived in Coron a couple of days ago. Sadly, the raptor was nowhere to be seen when we passed through the area. There were quite a number of egrets, Spotted Doves, Black-naped Orioles, Striated Grassbirds, and Paddyfield Pipits around. We reached the airport road and took some time stalking a couple of snipes feeding in the grassy area beside the parking lot.

There were more Paddyfield Pipits running about in the grass very close to the van. We spotted two male Blue Rock Thrushes chasing each other around the airport parking lot and some Scaly-breasted Munias posed in the morning sun, while Collared Kingfishers called loudly from the trees and wire fences.

We left the airport and drove further into the ranch. We spotted a raptor up a tree but it was chased away by some crows! It moved to a farther tree where it was almost completely hidden from view. It flew off before we could get decent shots and a proper ID.
We got back in the van and continued down the road. From the van, we saw a couple of Lesser Coucals out drying their feathers and a Black-chinned Fruit Dove also getting some morning sun, although they were all far from the road.
We passed by an empty field where there were some egrets, Little Ringed Plovers and also a lone Black-winged Stilt. We soon left the ranch "proper" and entered Barangay Decalachao and headed straight towards a surprise destination: The Riverhouse.

We entered the driveway and were surprised to see modern-looking cottages dotted along the road. I could imagine the wonderful view from each cottage! We stopped at the reception area and went straight to the restaurant area. It offered a great view of the Decalachao River and the vast mangroves around it. 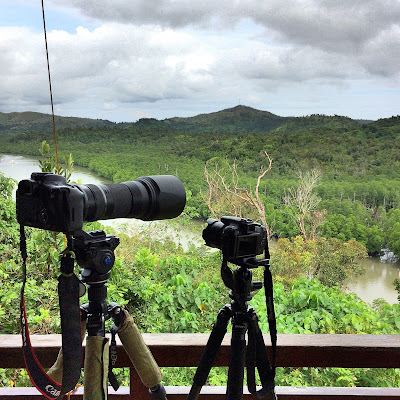 While waiting for our breakfast to be prepared, we birded along the road. We were treated to a male Olive-backed Sunbird busy feeding on some heliconias.
A Rufous-tailed Tailorbird sang around us, flitting this way and that, avoiding having its picture taken! I gave up on the skittish bird and just photographed some pretty butterflies and flowers around me. 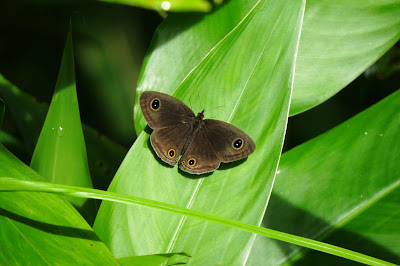 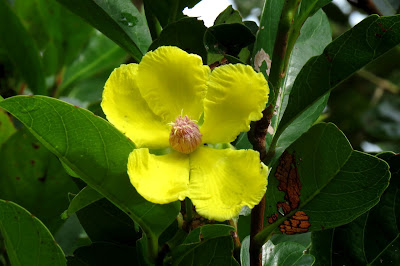 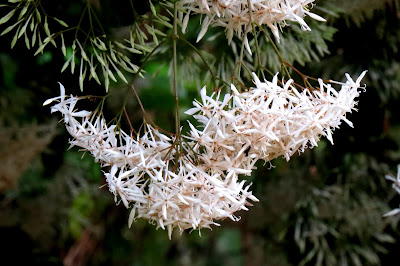 We started walking back to the restaurant when Ninong Chin pointed out an immature White-vented Shama. A female Olive-backed Sunbird also made an appearance among the heliconias near the restaurant.

We returned to the restaurant where we had a big, hearty breakfast with a wonderful view 💖 Thank you again, Ninong Chin, for bringing us there!

After breakfast, the rain fell. We stayed in the restaurant and began wishing for awesome birds to perch on a nearby broken trunk. We did gets birds that perched there: Asian Glossy Starlings. 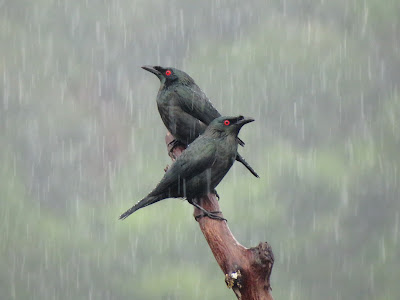 More birds came out even if it was raining. Ashy-fronted Bulbuls and Palawan Flowerpeckers perched on nearby trees.


When the rain stopped, we decided to check out the pier where there was a possibility of Stork-billed Kingfishers. We got out of the van and walked to the water's edge. 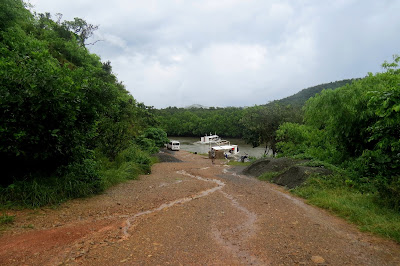 We scanned the mangroves and I spotted a spot of blue! Stork-billed Kingfisher faaaaaaar away! Just above it, a Chestnut-breasted Malkoha preened in the drizzling rain.


We headed back to the van when the rain started to fall again. We drove back towards the airport but before that decided to check the new road being constructed.

As we were driving through, Djop spotted a raptor perched on a leafless tree. It was being mobbed by Slender-billed Crows and also a Black-naped Oriole. The raptor stood its ground and did not move. 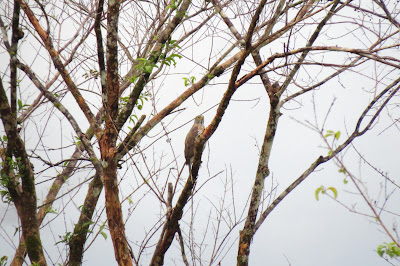 We left the raptor and went further down the road. The fields gave way to trees and soon both sides of the road was lined with tall trees. There were some Chestnut-breasted Malkohas skulking in some trees but we did not have the luxury of time to stalk them. We reached the end of the newly constructed road and turned back. It was time to go to the airport.

But not before a quick check at the raptor! It was still there but had adjusted to a clearer perch.

It flew away after  a few minutes and it was really time to go. We made our way back to the airport and said our goodbyes and thank yous. It was a wonderful three days in Coron, thanks to our gracious host, Ninong Chin 😊 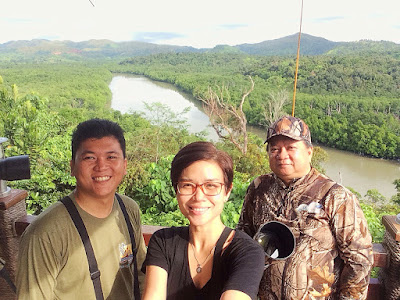 Coron is such a wonderful place for birding and we have so much more to explore! Next time, we'll be sure to spend more time there (three days is definitely not enough!!!) and we'll include the other touristy spots to our itinerary. Maybe some snorkelling too? IF I'm brave enough 😉 But, my bravery aside, one thing's for sure... we'll be back!
at October 01, 2017 2 comments:
Email ThisBlogThis!Share to TwitterShare to FacebookShare to Pinterest
Labels: birding in Coron, The Riverhouse, YKR
Newer Posts Older Posts Home
Subscribe to: Posts (Atom)