The dates for the 2017 Asian Waterbird Census (AWC) were up on the Wild Bird Club of the Philippines e-group and I found just one schedule that I was free to volunteer for: Candaba. I haven't been back to the site since I twitched the Falcated Duck and Baikal Teal last January 2016! Yes, one whole year ago!!! I signed up and was raring to go and count hundreds of birds in the marshland. 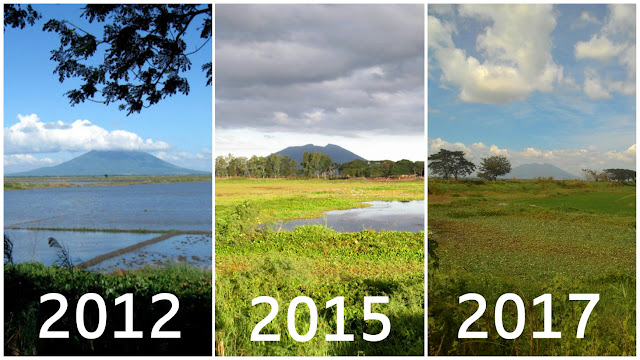 I've read the reports of birders who have visited the site last December saying that the ponds were overgrown and you couldn't see the ducks. I was hoping it wasn't THAT bad, but sadly, it was. Here are some photos I took over the years of the Candaba landscape to give you an idea of how much it has changed...

And this is mostly what the area looks like now...

The big pond is now choked with vegetation and the surrounding areas converted to rice fields. I looked around at the count site and was saddened by how much it has changed. But, we had a job to do and so we got right down to it. But not before we got distracted by an Eastern Marsh Harrier patrolling the big pond.

We made our groupings and assigned areas to each group and went our separate ways. The WBCP volunteers were joined by DENR personnel and LGU representatives.


I was grouped with Art, Riza, and Patty and we were joined by Ian from DENR. We drove to the back ponds and started scanning our area. There weren't really much birds since the land had been planted with rice already. Through the scope, I spotted some movement on the ground and hoped for waders, but the birds turned out to be Red-turtle Doves which seem to have proliferated in the area.

Art pointed out that there were some ducks near the old hut in the middle of the big pond and since we were done scanning our side of that particular area, we pointed our scopes to the small patches of water peeking from the plants. True enough, the ducks were there but it was very difficult getting any clear views! I saw there almost all of them were Philippine Ducks and I spotted a male Northern Pintail and some Garganey. I was beginning to get dizzy straining my eyes to see more details and spot more ducks so I tore myself away from the scope and we proceeded with our count.

Sadly, we saw more grassland birds than waders all the way until we came up the concrete highway. We did count some Little Ringed Plovers, some Kentish Plovers, a couple of Long-toed Stints, and some Common Sandpipers.

There were quite a number of Barred Rails, White-browed Crakes, White-breasted Waterhens, and even a Buff-banded Rail came out to preen. We had good views of Philippine Coucals and a Lesser Coucal while the Chestnut Munias and Striated Grassbirds were in abundance among the tall reeds of grass on both sides of the road.

Soon, there was nothing left to count. Zero ducks in our site, though we did see a lone Little Grebe on our drive back to the Mayor's house.

We drove back to the Mayor's house and waited for the other teams to arrive so we could tally our numbers and get the total count for this year's AWC. Not surprisingly, our counts were quite low given the change in the habitat.

Our total for that morning reached around 2,600. But that isn't the final count as figures from the ponds in the mayor's other property haven't been tallied yet. I'm hoping the number of birds counted this year isn't too low compared to last year's count (around 5,000) but I'm not keeping my hopes up... The highest count I've experienced participating in in Candaba was in 2012 with a high count of 10,456 while the lowest was in 2013 with a count of 1,631. Let's see. I shall bite my nails anxiously awaiting our final total and seeing what becomes of the Candaba bird sanctuary and marshlands.