We had another great morning birding areas of the International Rice Research Institute (IRRI) in Los Baños (LB) and it was all once again due to the generosity of Prof Tirso Paris 😊 It was also Global Big Day 2017, where birders all over the world are encouraged to go out and bird to support global conservation.

The day got pretty hot very quickly. Prof Tirso patiently drove Djop and me around the areas he usually found birds in, and birds we did find! There were large groups of Common Moorhens preening in the paths dividing rice paddies, with a Greater Painted Snipe or two among them.


As we went around the rice paddies, we were surrounded by the calls of Striated Grassbirds and Zitting Cisticolas and some of them perched out in the open long enough for some photos. A couple of Java Sparrows also fed nonchalantly on the grains in the morning sun.

Along the dirt roads were many Oriental Pratincoles, which was the highlight of the birding morning for me. These were the best views I've had of these birds and they were in their handsome breeding plumage too! Most of them allowed us to get close while in the car and take a lot of photos of them! 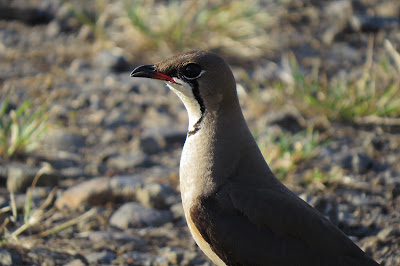 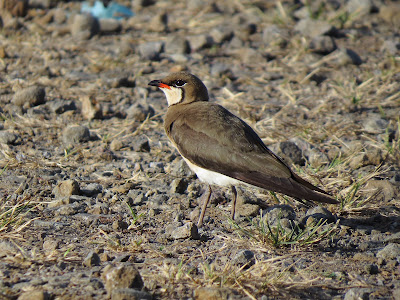 We were even treated to an unusual display by one of the Pratincoles, spreading its wings, and crouching low on the ground. It even walked forward towards another Pratincole, holding its wings in that outstretched manner. 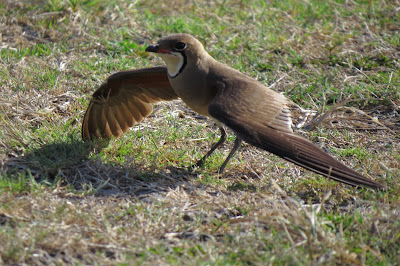 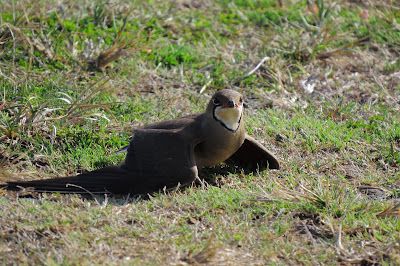 We scanned the empty rice paddies for Oriental Pratincole chicks but didn't find any. Well, either they weren't visible that morning or we failed to see them camouflaged in the dried earth. We did see some adult Pratincoles sitting on the ground, but saw no chicks. 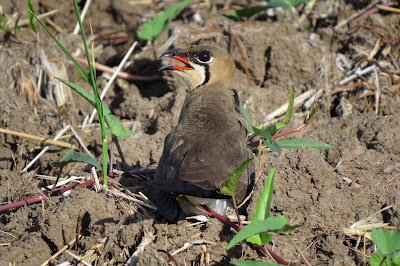 We moved to the reservoir and were greeted by a single Whiskered Tern. There were two Little Grebes in the water, diving and resurfacing as grebes do. They would venture out to the middle of the reservoir but would return to a specific corner where we found them to be building a nest in the floating vegetation! It was my first time to see a Little Grebe's nest! 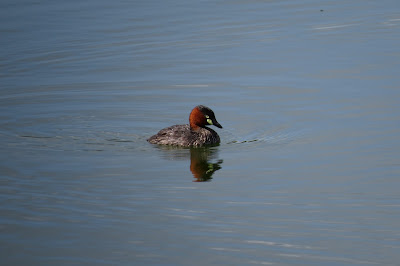 We soon left the reservoir and as we passed an empty rice paddy were surprised by a female Barred Buttonquail foraging out in the open! It has been years since I last saw buttonquails! It was so hard to photograph since it kept moving so quickly. When it walked out of view, a male Barred Buttonquail made an appearance and joined the female! What a treat!


It was mid morning when we headed to the IRRI canteen and had snacks and an interesting chat with Prof 😉 After our snack, we said our thanks and goodbye to Prof and headed to pick up Erickson and check out the TREES Hostel for any sunbirds that may be feeding on the blooms of the banana plants.

Sadly, the sunbirds chose to ignore the pretty pink banana blossoms and did not show. Some Luzon Hornbills made an appearance and a Philippine Falconet as well. Bar-bellied Cuckoo Shrikes chased each other noisily among the trees, but aside from them, the area remained relatively quiet.


The sunbirds did not show that day nor the next... I have yet to see the beautiful sunbirds in TREES --- makes me think I'm a jinx and an "anti-sunbird" given that I've tried a number of times and the banana plants had so many blooms!!! I guess I'll have to keep coming back to test that theory 😊
at May 26, 2017 No comments:
Email ThisBlogThis!Share to TwitterShare to FacebookShare to Pinterest
Labels: Barred Buttonquail, birding in IRRI, birding in Los Banos, Oriental Pratincole, TREES Hostel
Newer Posts Older Posts Home
Subscribe to: Posts (Atom)