Season of the Frogmouth

A Frogmouth isn't a bird I'd expect to see randomly. The first we saw was an unexpected sighting in the La Mesa Nature Reserve last April. But we saw one again just this weekend, giving Jops and I our second Philippine Frogmouth sighting for the year. As if the bird itself wasn't amazing enough, we saw the birds in areas not even an hour away from Quezon City!


This second sighting was totally unexpected. The Wild Bird Club of the Philippines was invited by Timberland Heights to do a bird survey in their property in San Mateo, Rizal. Together with friends from the Philippine Native Plants Conservation Society, we were brought around the smaller subdivisions and other green areas of the huge property.

The heavy afternoon downpour had just slowed to a drizzle when we set out to bird. There wasn't much bird activity because of the rain save for White-breasted Wood-swallows, huddled together on branches and electric wires. In the second site, we were watching out for the occasional Yellow-vented Bulbul and fly-by Lowland White-eyes when Jason, Timberland's outdoor events coordinator, spotted a bird and pointed it out to Jops. "Frogmouth!" he exclaimed while already setting up the spotting scope. And there it was... sleeping soundly under a canopy of leaves, shielding it from the rain.


We left the Frogmouth to continue its sleep and proceeded to another area. The drizzle had stopped by the time we arrived in the next spot and we got to see some birds coming out to dry themselves. I was able to get some documentary shots of some of them. There was a Philippine Coucal crawling on a low branch before flying to the opposite side of the street, some Tawny Grassbirds calling semi-hidden in the grass, as well as some Long-tailed Shrikes who came out to perch on the wires above us.

We visited a couple more sites and saw more or less the same species. That night, after a scrumptious dinner, we were all hoping to see some Grass Owls but the rain foiled any plans of us going owling. So, after a nightcap in our villa with friends old and new, we said our good nights and rested.

The following morning was rain-free and we were excited to go birding. We were brought to one of the bike trails where we immediately heard flowerpeckers calling hidden from the trees. Here we saw some Olive-backed Sunbirds, Elegant Tits, White-throated Kingfishers, lots of Lowland White-eyes, and a Black-naped Monarch.

We walked through a cemented road which overlooked a ravine and some members spotted Scale-feathered Malkoha, Ashy Ground Thrush, and White-eared Brown Dove. There were also Pied Bushchats, Black-naped Orioles, Large-billed Crows, and Philippine Bulbuls.

We rounded the trail and were told we would head to another site. It was a short walk to the nursery area and we were able to see other wildlife around us. We saw a Green Crested Lizard, and thanks to a friend who identified it, said that it is also known as the chameleon of the Philippines because of its ability to change colors. Cool! It was my first time to see one!


We also saw some beautiful butterflies and dragonflies. Some of them stayed still long enough for us to photograph them.

The next leg of our hike was the longest and I was honestly not prepared for it. We started our trek past 10am and we found ourselves trying not to slip through a steep, slippery, muddy trail. Then it was a hot trek through open field with occasional inclines which is my major "enemy" when birding. Then, somewhere towards noon, the rain fell. The trail began to get very slippery and muddy again but we could see the cars waiting for us and we knew the long walk was over. Whew!

After a refreshing bath and hearty lunch, we drew up our bird list for the morning and came up with 41 species seen and heard. Not bad for two half days of birding and with patches of bad weather too. It was nice exploring the place and discovering different bird species as well as the large green spaces still left in the property.

at July 29, 2013 No comments:
Email ThisBlogThis!Share to TwitterShare to FacebookShare to Pinterest
Labels: birding in Timberland, Philippine Frogmouth, Timberland Heights

I first saw the Philippine Eagle-Owl just after the new year of 2012. It was the first owl Jops and I ever saw and it was amazing! I can still remember being with fellow birders, led by Karen, enjoying the large and very behaved Philippine Eagle-Owl perched atop an acacia tree in the middle of Karen's busy office compound. I also very clearly remember the surprise and awe that rippled through the group as another owl flew in, and then led us to a juvenile owl in a nearby concrete plant box! A family of owls to start the year!

Fast forward to 2013, Karen is now in another continent and the owls have long left their nesting place. Luckily, Karen infected her office mate, Jayce, with the birding bug and he was keeping an eye out for the owls. He spotted them recently and Jops and I signed up for the second viewing of the owls.

We arrived a little past 5PM and saw Jayce and Brian already observing the owl. It was in the same tree as when we saw them last year. Anthony B. pulled up shortly after we parked and we all got our cameras and scope ready and walked to see the largest owl species in the Philippines. (It was a lifer for Anthony! So he walked faster than us =P) 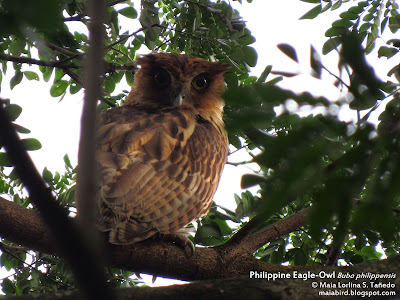 The owl was curiously observing us and other passersby walking out the compound on their way home. The afternoon sun was shining gently on the owl... and pretty soon it began to rain. We took cover in a nearby building and waited for the rain to stop. Thankfully it did and we went back to watching the owl. Jayce and I looked for some pellets and found some on a patch of grass under the tree.


Tina A. and her friend Malou arrived to view the owl (lifers for them too!) Light was fading quickly but we stayed, waiting for the other owl to fly in, as it has been observed doing that previously. After some minutes of chatting and waiting, Tina spotted something huge fly in from the trees to the area behind us! Jayce and I crossed the street to get a better view but saw nothing in the trees. Then suddenly, a huge shape flew towards our side of the street! It was the second owl and it came from the concrete plant boxes. A few seconds after, I saw a head pop out from the plant box... there was a juvenile owl there!

The rest of the group quickly crossed the street to get a view of the young owl. And what views we got! The juvenile owl hopped up on the planter's ledge and started walking the length of the box. It would stretch out its wings and practice going airborne for a few seconds before landing again safely on the ledge. It was really amazing to see it "practice" flying! The first owl was still on its perch, watching over its baby, while the other one hadn't returned yet. We were all ecstatic having just seen an unexpected owl family! It was definitely owl deja vu for me and Jops!

Just like last year, we got to unexpectedly see a whole family of owls and here we were again, just as surprised and just as lucky to see all three owls - two adults and a juvenile! Apparently, these Philippine Eagle-Owls reuse their nests and as long as they are not threatened or disturbed in any way, will continue to do so to the delight of us birders =)
at July 19, 2013 2 comments:
Email ThisBlogThis!Share to TwitterShare to FacebookShare to Pinterest 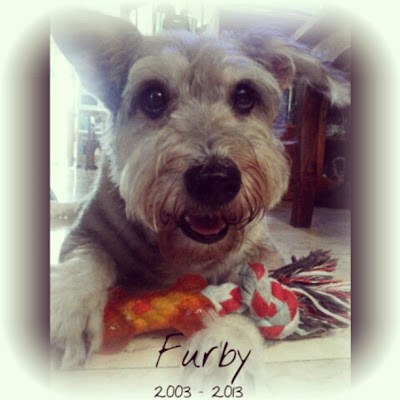 I miss you so much it hurts...
I will miss you everyday til the day we meet again
at the end of the rainbow bridge.

For now, enjoy all the chew toys and door stoppers you can play with
and all the pillows you can bury yourself in in doggie heaven.

I love you, Furb.
at July 08, 2013 2 comments:
Email ThisBlogThis!Share to TwitterShare to FacebookShare to Pinterest

Waiting for Butterflies: From Egg, to Cat, to Pupa

I've been waiting quite a while for the eclosion of two lime butterflies from their pupas in our small garden. Eclosion is the emerging of the adult butterfly from its pupa.

I've been lucky enough to witness the adult lime butterfly lay its eggs, usually on the underside of the leaves of my mom's calamansi plant. It curls its lower portion to deposit a single, yellow egg on a leaf.


I've seen the eggs hatch into tiny caterpillars which slowly gnaw at the leaves' edges. I've observed them grow into much larger brown caterpillars... 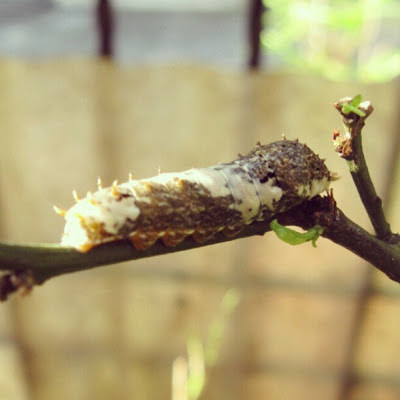 and then change into plump, bright green caterpillars... 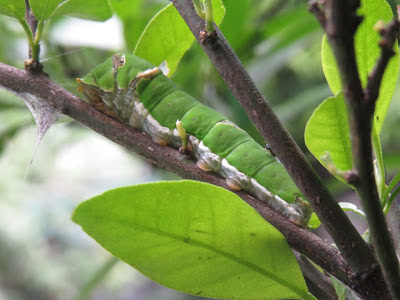 The newest stage I've seen was the positioning of a green caterpillar to turn into a bright green pupa!

Upon closer observation, I saw another pupa which was brown. I checked out the very detailed and amazing page on Lime Butterflies on Butterflies of Singapore which Adri and Trinket shared with me months ago. I learned that this species's pupas can have two color forms: green and brown. And we have both at the same time in the same plant!

The pupas are supposed to turn black and then become transparent, showing the developing butterfly inside and after a day, the eclosion happens. So now, I wait.

And wait. And wait.

Both pupas have not turned transparent and I am afraid that they might have "drowned" during the past days' rain. The brown pupa also has a small hole on its side which makes me think it was "invaded" by another insect, and Adri thinks this is possible.

I guess the survival rate isn't quite good for these butterflies. The first batch of caterpillars I observed "disappeared" before pupation (we think the birds ate them.) At least, this batch made it to the pupa stage. But I will still observe and wait for the butterflies to emerge, maybe they just need more time. (Otherwise, I am so tempted to inspect the inside of the failed pupas.)