We initially planned on going to LPPCHEA (Coastal Lagoon) but when there were reports of a sighting of  a Long-billed Dowitcher in Candaba, we decided to go there (and twitch that) instead.


So, we drove early in the morning to Candaba to with our friends Rob, Irene, and Kitty. Our party immediately began scanning the empty rice fields, checking on each wader, looking for the dowitcher. We saw lots of waders... but no dowitcher. We decided to walk closer to the fields where the waders were scattered far and wide. Some of the paddies have already been planted with rice and others had farmers working on them. Some of Candaba's usual suspects gave us great views.


It was 9am when we reached the cars and it was time to head back home. We brought out some pastel to share and Rob brought out two cans of ice cold beer, supposed to be for celebrating when we saw the dowitcher. We didn't get to tick it off but it was still a very good morning spent with friends =)

at November 27, 2013 No comments:
Email ThisBlogThis!Share to TwitterShare to FacebookShare to Pinterest

The tide was going to be very low Saturday morning and Jops and I were hopeful for lots of waders, if not for another windswept lifer (just like the Brown Booby we saw last August.) Typhoon Yolanda, a Category 5 super typhoon, ravaged many areas in the Visayas, bringing 235kph winds, heavy rains, and destructive storm surges. Manila was not in the typhoon's direct path but was to experience bad weather. We decided to brave the possibly stormy weather and check what birds it could bring inland.

We geared up for possible rain and strong winds but were instead greeted by a hot and sunny morning. I expected to get wet and cold, but I went home with a sun-burnt face and arms.


We stopped at the fish market and saw hundreds of terns, Asian Golden Plovers, Common Redshanks, Kentish Plovers, a number of Grey Herons, as well as Great and Little Egrets. Jops diligently did the counts before we proceeded to the Coastal Lagoon.

We went straight to the end of the road and whiled our time with the birds that were feeding in the area. Whiskered Terns flew very close to us and the Collared Kingfishers were dotting the huge rocks.


A Little Egret also got my attention as it walked along the shallows and up and down the rocks, searching for food. A Common Sandpiper also perched for a while on one of the rocks before flying noisily away towards the beach.

I went to where Jops was photographing the terns when he shouted "Osprey!!!" I strained my eyes far out to see and saw a raptor flying over the open water, hunting for its breakfast. It has been quite a long time since I last saw the Osprey in the area and it was a thrill seeing it dive into the water and pull up to take flight again. Unfortunately, without any fish =P

We observed, photographed, and videoed the Osprey until it flew farther away. We would see it again flying over the main road later that day, hunting over the water near the Coastal Road. A pretty Common Kingfisher entertained us for quite a while as it perched from one rock to the next in front of us.

When the kingfisher flew out of sight, we decided to drive back and see what waders we could find on the beach. We bumped into our birder friend, Tonji who was birding solo that morning. We regrouped by the beach and scouted out the area. The tide was really low allowing the birds to forage closer to the road side. We saw Common Greenshanks feeding with the egrets. Futher away, we could scope out a huge group of egrets clustered at the far end of the island. 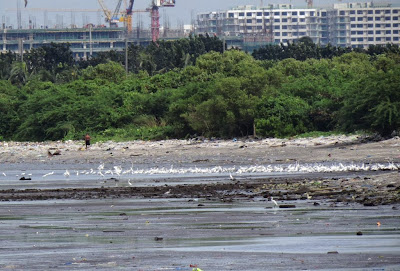 The heat was becoming really harsh and I felt my face begin to tighten and smart... I knew I was getting burnt. I was ready to just bird in the shade, but Jops was able to scope what looked like a godwit! The three of us headed to the beach to get a closer look. Just like us, the godwit seemed to belong to a trio - the Black-tailed Godwit, a Common Greenshank, and... a Grey-tailed Tattler? The third bird seemed too... short and plump to be a tattler. Hmmm. We took photos and decided to ID it later on.

We later confirmed that the third bird (the one in the middle in the photo above) was not a tattler but a Great Knot! It was cool to see it in this site, as well as the godwit. Then, people started walking on the mudflats, driving the birds away. The mid-morning sun was boring down on us with intensifying heat so we decided to call it a day.

It was an unexpected hot day, a complete opposite of the weather we prepared for, but it was still good birding. It was the lowest tide I've seen in LPPCHEA and even if there weren't any blown-in storm-birds, we did get a godwit and a knot =)

Post script: We came home to horrible news and images of the victims of Typhoon Yolanda. Manila was spared but our fellow countrymen in the Visayas were devastated by the storm. For information on how to help, please click this link http://www.redcross.org.ph/donate.
at November 11, 2013 2 comments:
Email ThisBlogThis!Share to TwitterShare to FacebookShare to Pinterest
Labels: Black-tailed Godwit, Coastal Lagoon, Great Knot, LPPCHEA, migratory season
Newer Posts Older Posts Home
Subscribe to: Posts (Atom)