Dressed To The Nines

... the birds, not me. It's breeding time for most of the birds in Candaba and us four birders found ourselves unofficially invited to the affair.

Jops, Trinket, Peter and I found ourselves exploring a new area in the Candaba wetlands last Saturday. We guided a group of students and their parents that morning and found ourselves wanting to bird some more. We've already seen hundreds of Philippine Ducks with the kids, together with a small group of Tufted Ducks and some Northern Shovelers, but we had the rest of the afternoon free to bird by ourselves.

The people and farmers in the area pointed us to the location where we could see the ducks. And ducks we did find! Thousands of them!


Among the ducks, we also saw lots of male Garganeys! The white stripes on their heads peeking out of the green reeds. Unfortunately they were too far even to digiscope. The other "well-dressed" birds in their breeding plumage were also among the reeds. Lots of Pheasant-tailed Jacanas walking around, sometimes only their long tails visible in the sea of green.


It was really amazing seeing a lot of these birds, most of them sporting the long tails and flying from one pond to the next, showing off its beautiful wing pattern when in flight. Beautiful, beautiful birds!

We were also treated to huge groups of Oriental Pratincoles, also in their breeding plumage. Some of them would just be standing on the road, flying when the car would approach but landing just a few meters further down the road.


We saw a group of around 30 Pratincoles, with their backs turned to us, in a brown patch of rice field. Among them were a couple of Oriental Skylarks running around!

There were so many wonderful birds to see so... we decided to count. Out came the scopes and the notebooks and we recorded the numbers of birds we saw.


After doing the counts, we walked further down the road. Before we reached the "end" of a long stretch, the ducks suddenly all took flight! Trinket and I literally didn't know which way to look! It was pretty awesome!

When the ducks finally settled down, a light rain began to fall. We headed back to the car but as we reached it, the rain stopped. We decided to call it a day. As we drove along, we encountered more birds dressed to the nines. We saw flocks of Cattle Egrets, their feathers turning from the "standard" all-white to orange buff which is their breeding plumage. 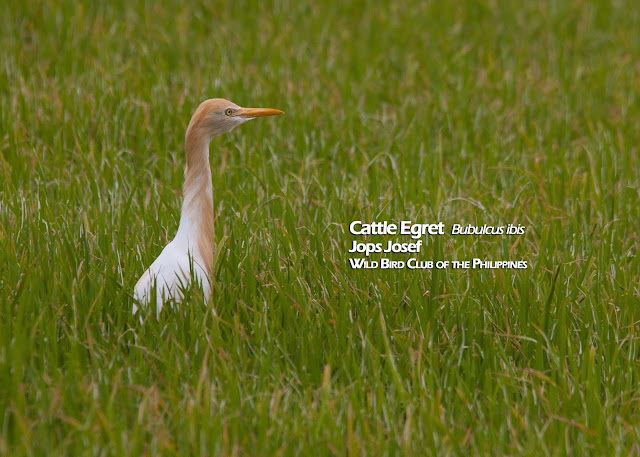 We passed the last rice paddies with the Cattle Egrets before driving into more populated areas. We saw so many birds, most of them in their "best" plumage of the year. I can safely say there won't be any bird in a "Worst Dressed" list, at least for this season.
at March 30, 2012 2 comments:
Email ThisBlogThis!Share to TwitterShare to FacebookShare to Pinterest
Labels: breeding plumage, Candaba, Cattle Egret, Oriental Pratincole, Pheasant-tailed Jacana

After running errands and other things on our to-do lists for the morning, Jops and I headed to La Mesa Ecopark to spend the rest of the afternoon birding. Having no big expectations and just wanting a relaxed birding afternoon, we "packed light" and just brought our bins, his camera, my birding notebook and a bottle of insect repellent.

We entered the park, saw some familiar faces from the mini-training we gave some park guides some time back, got in for free and headed for the trail. Before reaching it, we spotted our birder friend Jasmin with her friend looking at some plants. She told us she was able to see the Ashy Ground Thrush and the Red-bellied Pitta in the trails. Jops and I trudged onward and found ourselves entering the trail together with small groups of noisy teenagers. We shook our heads and tried to shush them gently.

We picked a spot and noticed a Lowland White-eye perched curiously near the ground. Watching it led us to a Mangrove Blue Flycatcher, also perched very low, and this led us to an Ashy Ground Thrush hopping around the area.

While observing the thrush, we heard another noisy group of kids approach the area. As they neared us, we told them to be quiet and to stop first. The girls stayed put while two boys moved closer to us and asked what we were looking at. When we told them we were looking at a bird, they immediately crouched low next to us and peered at the undergrowth in front of us. The girls tiptoed past us and walked away but the two boys stayed put. We passed them our binoculars and showed them the thrush which was only a few feet away! We were able to spot two adult birds!

The rest of their group came along noisily, and it was the two boys who did the shushing this time =) The new group of boys was also interested and spent some time with us, even spotting the Mangrove Blue Flycatcher as well. We felt so bad we didn't bring our Kennedy guide!


Some of the high school boys were really interested and asked us questions using words like "endemic", "endangered", and "ecosystem." We were pleasantly surprised and were happy to discuss these things with them. So, when a noisy group would approach us, they would be the ones to gesture for them to be quiet and to move slowly. After a while, the boys said their thanks and moved on to join their other classmates. (They did come back a second time and stayed a while before moving on again.)

Jops and I moved further into the trail, hoping to spot the Red-bellied Pitta. After a few minutes (and some more small groups of noisy park goers passing through), we heard a boy calling out from a distance "Birdwatchers? Birdwatchers?" A few seconds later, we saw two boys walking towards us. They left their friends to come and bird with us some more! They were Renz and Lorenzo, first year high school students from a nearby public high school. The two boys stayed with us, carrying and using our bins, spotting birds along the trail, until we left the park. They asked if we did that everyday because they would like to go birdwatching again.


It was refreshing meeting random young "padawan" birders who initially came to the park noisy and unmindful of nature, and leaving with new insights about the park they frequent. This is one of the simple but deep joys we get from birdwatching and guiding people, especially the young ones. When you are able to change their minds and open their eyes to real beauty (and reality) around them, to enable them to explain to others the importance of taking care of the environment, to create more advocates for nature... it's what Mastercard calls "priceless." Jops and I weren't able to use our bins for the most part of the afternoon, but it wasn't any loss on our part.

PS We celebrated with Chinese food after that. But we paid in cash =P
at March 28, 2012 4 comments:
Email ThisBlogThis!Share to TwitterShare to FacebookShare to Pinterest

Boiling Me Some Bones

Exam week has officially passed and my "teacher mode" has been switched from "hyper" back to "normal." The bones from the Philippine Eagle Owl pellets I collected two weeks ago have remained in their sealed plastic container on my desk... until this afternoon.

I finally had time to sit down and examine them once again. I remembered Trinket's advice to boil the bones in water to remove any dirt and debris. Seeing her online, I quickly sent her a chat message to confirm what I had to do before I went about brewing the bones. I looked for an old, unused pan from our dirty kitchen and asked permission from my mom to do what I wanted to do. After giving me an odd look, she finally agreed. 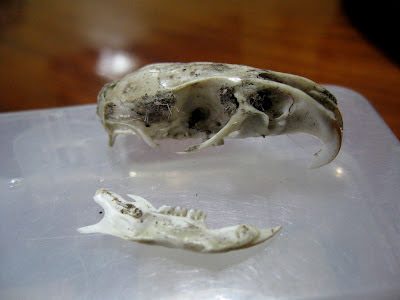 The second pellet I saw had bones from an animal's extremities. 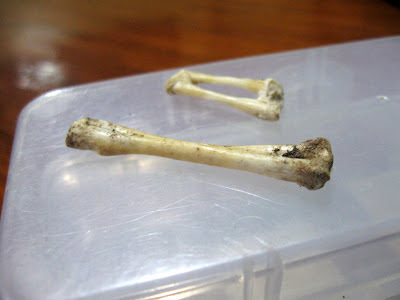 I tried my best to brush and wipe off the dirt before dropping them in the boiling water.

I let them stay in the boiling water for only a minute before I took them out and laid them on paper towels to dry. I still had to clean the inside of the skull some more but had to be extra careful since the molars attached to the skull were getting a bit loose already.

At this point, my mom and brother were looking at each other while I worked on my bones. But because they love me and have ever since known me as a bit weird, they gave me my space and left me alone =).

This is the underside of the skull before being dried completely. There were still some debris in the cavities that I had to gently poke out with a toothpick and brush off.

This is the mandible I collected in the same pellet as the skull. The teeth are soooo small they're amazing to see up close! And with no cavities even without brushing, mind you! 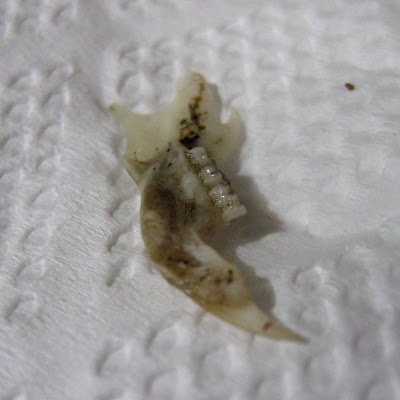 These are the bones collected from another pellet. I still cannot identify which bones they are. The shorter bones I can't be sure of but they look like forearm bones (radius and ulna.) The longer one looks like a femur to me but I can't be sure. Help! 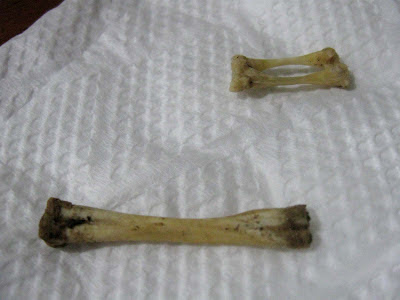 Trinket was wonderful enough to send me a resource to help identify bones found in pellets. She shared with me a copy of a "Owl Pellet Bones Sorting Chart" from the Nature-Watch website (happiness!!!) =) Below is a portion of the chart she so generously shared with me.

Looking at the chart, I could identify the skull and mandible I collected as those of a rodent! The other bones I am still not sure of however. I can't wait to find my next owl pellets and examine what I find!

THANK YOU TRINKET FOR THE HELP AND THE LINK! I OWE YOU =)
at March 09, 2012 2 comments:
Email ThisBlogThis!Share to TwitterShare to FacebookShare to Pinterest
Labels: owl pellets, rat bones
Newer Posts Older Posts Home
Subscribe to: Posts (Atom)