I had to go to work on the day of the Metro Manila Shake Drill and as I didn't want to be caught in possible traffic and be late (I hate being late!), I decided to go to work before the 10:30am city-wide earthquake drill and also sneak in an hour of birding in the UP Diliman campus.

I drove straight to the Marine Science Institute building and was greeted by a small flock of Lowland White-eyes flitting in the tall acacia tree by the parking lot. As I got my gear ready, I could already hear Black-naped Orioles and Coppersmith Barbets calling. I got a bit excited: could the balete trees be fruiting?!

I walked towards the small row of ficus trees and I was right! Dark red berries dotted two of the three trees in front of me. A Black-naped Oriole was there busy feeding on the ripe fruit.


I tried taking some shots and realized with some frustration that I was verrrrry rusty. I haven't been birding for more than a month and knew that I needed to "flex" my birding muscles first. It didn't help to have faulty equipment but that's another blog post.

The Oriole finished its breakfast and flew across the street. My birding eyes started focusing properly again and I saw one, then two, then three, then more Coppersmith Barbets! They were there feeding on the fruits, hopping from one branch to the next!

Of course, as I struggled with my camera, I couldn't get any decent shot...

I sat on the sidewalk, like how I sat there many times before, and allowed myself to watch the Barbets feeding. After a while, they kept still, probably already full from all the fruits they ate. And then the Yellow-vented Bulbuls came. It was their turn to feed =)


A Collared Kingfisher stated calling from behind the building so I stood and tried to spot it. Spot it I did but I was too rusty to get any photo, even as it stayed preening on an exposed perch for quite a while. Oh well, I got good views anyway =)

I checked the time and it was time to go. It was a quick birding trip and a not so birdy morning, but I did get great views of the birds and that was more than enough for me. For now =)
at July 31, 2015 1 comment:
Email ThisBlogThis!Share to TwitterShare to FacebookShare to Pinterest
Labels: birding in UP, Black-naped Oriole, Coppersmith Barbet

A Zebra with a Message

A Zebra Dove, that is. And it told me it was time to be brave.

I admit, I went into hibernation. Or maybe the better term is “self-induced social coma.” I was blind-sided by a sudden rejection and betrayal, which really, really hurt a lot because it came literally out of nowhere. No warning, no build-up of events, nada. None of that drama.  Just a big bombshell of a phone call and my reality was altered. It shook past, present, and future and I was lost. I am now a testament to the term “hot potato.” Add to that the fact that it came from a person whom I least expected to hurt me, it really shook me off balance in so many ways.  Strangely, my reaction wasn’t the usual fight or flight. I actually stagnated.

And then, after a month or so, a Zebra Dove paid me a visit.

I came home from work one day and I saw it just outside our garage gate. I parked the car and still there it was. I suddenly felt scared for it. It might be injured and one of the many free-range cats in our subdivision might get it! I stepped closer to it to check if it was hurt. It didn’t look like it was hurt in any way. It actually looked very clean and healthy! It shifted on its tiny feet towards my direction and cocked its head as if to look me in the eye. For a few seconds, we stared at each other: a Maia and a Zebra Dove. 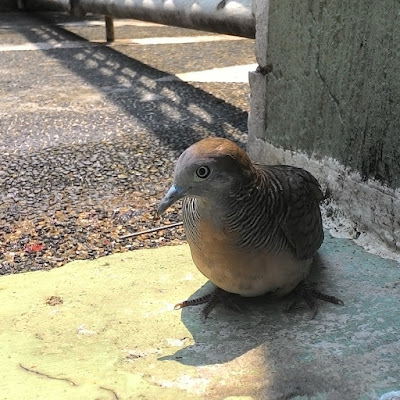 I took my phone out thinking “Should I take a selfie?” but decided to just take a photo of the dove sans my face. It stayed a few more seconds before it flew calmly to a nearby guava tree. It looked down at me one more time before flying away to a higher mango tree.

I know it’s just a chance encounter with one of the more common birds in the city, but I may be suffering from some mild Post-traumatic Stress Disorder, so I’m probably reading into it more than I should. But I will indulge myself.

I posted that photo on Facebook and it has gotten more than a hundred likes! It’s either the common Zebra Doves have become a “wow” bird or my friends are just happy that I’ve finally woken up and have decided to go out and bird again. I choose to believe the latter (sorry, Zebra Doves.)

A friend asked me "Why'd you stop?" and that made me think long and hard. Why did I stop birding? Simple answer: I was scared. Of a lot of things which I will not elaborate anymore.

That Zebra Dove told me it’s now time to be brave (PTSD speaking) and I choose to look forward and live again. To hell with closure. 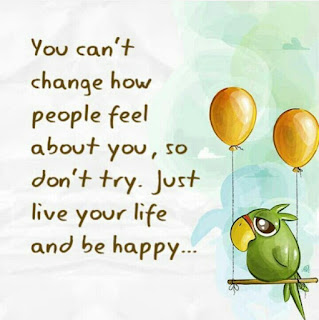