I am very grateful to have been given the opportunity to participate in two counts for 2019's Asian Waterbird Census (AWC) in sites I've never been to before. As always, the experience of visiting a new place in the Philippines is unforgettable and will forever be shared with the people alongside me.


The first count I volunteered for gave a surprise sighting that even made it to the front page of the Philippine Daily Inquirer! I've joined in a number of bird counts and surveys of Manila Bay with Arne Jensen, the Records Committee Chair of the Wild Bird Club of the Philippines and an associate expert of Wetlands International but I've never been to the count site I was assigned to last January 12. Djop and I were assigned to join the team of Mads and Lu-Ann Bajarias to count in Sasmuan, Pampanga which included Bangkung Malapad.
Our jump-off point was the fish market in Orani, Bataan so our team of four was already on the road before 3:00AM. We arrived in Orani and was met by Freddy, our boatman for the trip. We wanted to be at Bangkung Malapad by sunrise so we boarded our katig-less banca in the dark and headed off to Manila Bay. 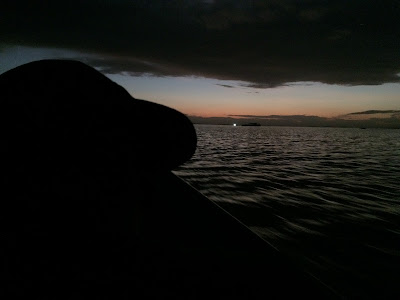 As our surroundings became lighter, we were joined by groups of birds skimming the surface of the water around us. It was a such beautiful dawn!

We were soon approaching the entrance to Bangkung Malapad. Bangkung Malapad, also called the Sasmuan Bangkung Malapad Critical Habitat and Ecotourism Area (SBMCHEA) is a small islet in Manila Bay and boasts of mangrove trees and mudflats where migratory birds can be found.

As we got to the viewdeck, we all began setting up: scopes, cameras, food... when I saw three heavy-ish birds flying our direction. My heart skipped a beat when I noticed their distinct heavy bills so when I raised my binoculars to confirm what I thought they were, I couldn't contain my excitement and exclaimed loudly to the group: "Spoonbills!!!" In my excitement at this completely unexpected sighting, I struggled finding the "Black-faced" portion of their name, spinning in place as I forced my brain to cooperate. "Black-faced Spoonbills!" I finally managed to say. I looked at my friends and was even more delighted to know that all of them saw the spoonbills and that they were lifers for Djop and Mads (yay!), and a country lifer for Lu-Ann (yay!)!


The spoonbills flew around the view deck a number of times, giving us great views and chances for photographs in our slowly brightening surroundings. We thought (and hoped and prayed) that they would land in the mudflats right in front of us, but sadly they did not and instead flew away behind the mangroves and out of sight.


The spoonbills did not make any more appearances the rest of the day but we did get to see quite a big number of other birds: Black-headed Gulls, Great, Intermediate and Little Egrets, Asian Golden Plovers, Gull-billed Terns, Whiskered Terns of course, and some Caspian Terns. We were soon joined by counters from the DENR, DOT, and WBPP and we scanned and counted the further sides of the mudflats which are covered by the mangroves if you stand on the view deck.


After we counted the area of birds, we said our goodbyes to the rest of the team, boarded our banca and headed off to our other count spots in the area. Sadly, there weren't much to see in the stops we made save for feeding flocks of Whiskered Terns and egrets. We did pass by a small group of Black-winged Stilts but not much other waders.

We made our way back to Orani, stopping by a large expanse of exposed mudflats which held quite a big number of plovers. The mud was too wet and mushy for us to stand on for better views, so we took note of the site (no longer in Bulacan) and went back to the fish port. We collated our data over lunch and drove back to the city with a total of more than 9,000 birds for our count. The number was quite low but not bad, plus we had a mega record sighting of the Black-faced Spoonbills too! Black-faced Spoonbills are globally endangered and our sighting last January was the first in more than 100 years since it was last recorded in Manila Bay.

With more and more birders looking at the birds in different areas in Manila Bay, hopefully the efforts to protect and conserve it will pay off. And hopefully, with sightings such as the Black-faced Spoonbills among other birds, there is more than enough justification for the protection of the habitat, not only for the birds and other wildlife, but also for humans too.

Here's a link to the article Lu-Ann wrote for the Philippine Daily Inquirer and republished in WBCP's eBON.