I’ve been wishing to see the male Narcissus Flycatcher for years. Five years to be exact. I’ve actually seen the female back in 2011 and have always dipped on any attempt to see the male, sometimes missing out on the bird by a few minutes. Yellow and black, the male Narcisuss Flycatcher is much more striking than the brown female but its elusiveness has earned it a title of “Unicorn Bird” — as if it was a mystical creature that doesn’t really exist (and is also a rationalization for those of us who have continually missed out on seeing it.)

Recently, a number of male Narcissus Flycatchers have been seen and photographed in different locations: Baguio City, Manila, Quezon, Palawan, and also in nearby LPPCHEA (Las Pinas-Paranaque Critical Habitat and Ecotourism Area.) So I went with Chin and Mark to LPPCHEA and try my luck there (plus I’ve really missed seeing waders!)

We decided to skip the beach and go straight to the trails and try to find the Narcissus Flycatcher. As we were registering with the DENR personnel, he pointed out a young Reticulated Python coiled up on a low branch in front of the birdwatching station.


We entered the trail and kept our eyes open for any movement around us. There were a lot of Philippine Pied Fantails and Arctic/Kamchatka/Japanese Warblers flitting around the trees. I saw a large-ish bird and recognized the tail of a cuckoo but the bird flew as soon as a Brown Shrike called! Further down the trail, Mark spotted the cuckoo and we were able to observe a beautiful hepatic Oriental/Himalayan Cuckoo feeding on a tall tree.


We observed the cuckoo for a while until it disappeared from view and we refocused on finding the Narcissus Flycatcher. We went deeper into the trail and more birds were coming out. Golden-bellied Flyeaters and Yellow-vented Bulbuls came in big groups to feed and Grey-backed Tailorbirds sang unseen around us. As we slowly walked the trail, Mark suddenly pointed out a bird, busy whacking a worm on a tall branch: Blue and White Flycatcher!


We didn’t expect to find this bird! But there it was, busy with its meal! After eating the worm, it adjusted its perch, looked around, and flew away. Lifer! We trudged on, still looking for the Narcissus Flycatcher. We were nearing the end of the trail and I managed to spy a Yellow Bittern through the leaves near the first pond. 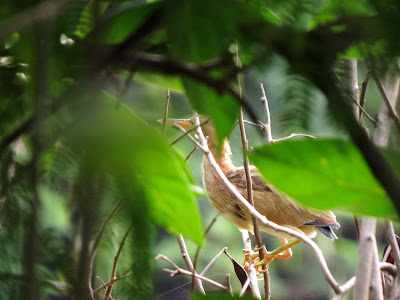 There was a big group of students at the birdwatching station and Mark pointed out the python to them. They also swarmed around Chin, curious about his attire and gear, asking if he was a soldier ;)

The girls moved on and so did we to the beach. There were some egrets by the water’s edge and some large waders foraging in the sandy trash (or trashy sand.) Upon closer inspection, more waders came into focus! Whimbrels, Pacific Golden Plovers, Kentish Plovers, Common Greenshanks, and Common Redshanks walked along the beach searching for food. We also spotted one Chinese Egret on the beach as well as a couple of Terek Sandpipers and Bar-tailed Godwits!


We also spotted a huge flock of Red-necked Stints that would fly across the water and land on the shore again. Among the stints were some larger and whiter birds… my second lifer of the day: Sanderlings! I missed seeing them in LPPCHEA years before and I was thrilled to finally tick them off this year! They stayed long enough for me to study their markings and compare them to the other waders beside them.


We decided to move towards the main road and hope for a better vantage point but we didn’t get better views. We returned to our original spot and after some more time with the waders decided to try one last time for the Narcissus in the trail.
Let me just say that after rounding the trail one more time, the Unicorn remained a Unicorn and the closest I ever came to seeing a Narcissus that day was in the colors of this insect. 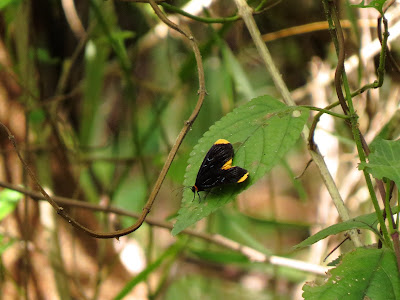 ‘Til my next attempt, Unicorn Bird.
at October 29, 2016 No comments:
Email ThisBlogThis!Share to TwitterShare to FacebookShare to Pinterest
Labels: birdwatching in the Philippines, Las Pinas-Paranaque Critical Habitat and Ecotourism Area, LPPCHEA
Newer Posts Older Posts Home
Subscribe to: Posts (Atom)