It Began and Ended With Owls (With A Spiderhunter in Between!)

I wanted a full day of birding. Full. So, we geared up at the parking area of the Tanay Rainforest Camp at 5:30 in the morning. Our guide, Kuya Ronald, was already at the gate waiting for us.

We parked near the cabins and stepped out into a really cold and nippy morning. Some of the birds were already starting to call from the darkness: Spotted Wood Kingfishers, Scale-feathered Malkohas, and Balicassiaos could be heard calling very close to us!

We arrived at the right time to catch some owls in the area. We backtracked a bit and even heard some Philippine Nightjars calling. As luck would have it, some hawk-owls started calling nearby! After a bit of searching, two shadows flew overhead and landed on a high perch above us. We could make out two shadows on a branch: Luzon Hawk-Owls!


It was a great way to start our day! We started our walk down the trail and just a few meters from the car, we were distracted with lots of bird activity on a far tree. A big group of Colasisis were feeding alongside Red-keeled Flowerpeckers, Elegant Tits, and Philippine Bulbuls. Jops and Kuya Ronald noticed a distinct bird perched on an open branch. It clearly had a fish-tail and when Jops scoped it out, it was an Ashy Drongo! It is described in the Kennedy field guide to be found only in Palawan but it has previously been seen there in Tanay, and also in Subic, in the past years.

We moved on and were greeted with even more Colasisis. A number of them were actively feeding on the blooms of an African Tulip! The Colasisis left and were replaced by Yellow-vented Bulbuls and we also spotted a lone Stripe-headed Rhabdornis.


We moved on further in the trail and were immediately surrounded by the musical calls of White-browed Shamas, singing unseen from the brush. A couple of Philippine Cuckoo-Doves made brief appearances and we were entertained by a huge flock of Ashy Minivets.

We stopped by a leafless tree where a single Coleto was singing its heart out! On the same tree, we saw a Whiskered Treeswift and a Grey-streaked Flycatcher.

We left the Coleto, still making its assortment of metallic calls (like a choked up R2D2!), and continued walking. I went on ahead, enjoying being surrounded by so much green and also the nice, cool weather. I found I was alone and looked back to see Kuya Ronald motioning for me to go back to the leafless tree: I hiked back up as fast as I could and was able to see a Luzon Flameback crawling up a branch! Cool!


We continued walking and stopped in an area where we spotted an Eye-browed Thrush feeding on a fruiting tree quite a distance away. We spent some time straining our eyes, trying to get a better view and also to determine how many thrushes were actually there. We just confirmed one Eye-browed Thrush while the other birds around it were Philippine Bulbuls.

As we walked downhill, we encountered a Black-chinned Fruit-Dove, a couple of Luzon Hornbills, Yellowish White-Eyes, Rough-crested Malkoha, and our lifer for the day: Brown-throated Sunbird!

We soon reached the end of the trail and stopped to take a breather and ate some snacks as well. It was already past 9AM but the weather was still nice and cool. As we chatted with Kuya Ronald and munched on our biscuits, we were entertained with Blue-throated Bee-eaters and Pygmy Swiftlets flying all around us. Soon we were on our feet again and were hiking back up the trail.


We passed the flowering African Tulip tree and Kuya Ronald pointed to us a stationary bird, perched in the shadows of a tree. Could it be the Violet Cuckoo?! Honestly, we first thought it was! But upon closer inspection, it turned out to be a Philippine Drongo-Cuckoo.


Suddenly, completely unexpected, a Naked-faced Spiderhunter showed itself to us! We didn't expect to see this endemic during this trip so it was an extra special bonus! It was moving constantly and so high up in the tree that I couldn't get a single shot! Then it was driven away by Yellow-vented Bulbuls!

We hiked up to the "overlooking" point and took another short breather, and took in the sight. It was turning out to be a very nice birding morning!

We were also finally able to see a Coppersmith Barbet in the area, just one of the many barbets continuously calling the whole time we were there.

It was lunchtime when we rounded our walk and reached the parking lot. We sat down under the trees and enjoyed our light picnic lunch before taking a short siesta.


We started our afternoon birding by going back to the flowering African Tulip. As we approached it, there was the Naked-faced Spiderhunter feeding on the blooms! I decided to stay in that area and try to get a good shot of it.

My patience paid off! And even if my SX50's autofocus was having problems, I was able to get some good shots of the Spiderhunter as it fed on the juicy flowers in the afternoon sun.

When the birds had quieted down, I walked back to the car to wait until the sun set and try our luck again with the owls. While waiting, the Scale-feathered Malkohas came out and flew among the trees just beside the car!

When the sun set, the Spotted Wood Kingfishers started calling again, but didn't come out from their hidden perches. Suddenly, from the inky darkness, the hawk-owls started calling too and  two shadows swooped in silently above our heads, just like what happened in the morning. As if to give us good closure, two Luzon Hawk-Owls perched side by side and bid us good night.

It was a loooong birding day (13 hours to be exact) but it was a great one! We started and ended it with owls plus a spiderhunter (and more!) in between!
at January 18, 2015 4 comments:
Email ThisBlogThis!Share to TwitterShare to FacebookShare to Pinterest
Labels: birdwatching in the Philippines, Naked-faced Spiderhunter, Tanay Rainforest Camp

January for members of the Wild Bird Club of the Philippines means AWC season. AWC stands for the Asian Waterbird Census which is a count of waterbirds in wetlands covering Asia and Australasia. The counts are done for a specified period in January so we get, more or less, a good idea of the current numbers of waterbirds in the region.

I have been volunteering for the AWC for the past years and we've consistently counted in Candaba. So this year, we were off to count again in the Candaba marshlands and see if the numbers improved or have dropped.

Good news is that the numbers actually improved! From last year's count of 5,177 this year's count is now 7,186. Still a far cry from the high count of 2012, but still an improvement from the past two years. Here's a simple graph I made to show the trend from the past years. 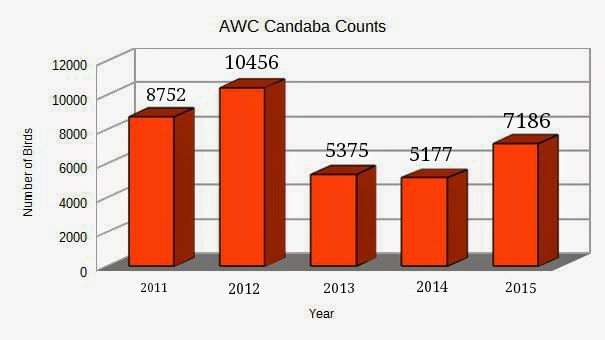 But I skipped all the exciting birding parts! Let's go back to the very start of our day in Candaba. Our convoy arrived at the former mayor's property before sunrise and after assigning people to teams and specific areas to count it, we were off!

My team was assigned to the large ponds in front of the mayor's house. It was quite overgrown with lilies and hyacinths but there were patches of water where the ducks were. The first bird we saw were some Little Grebes and Common Moorhens. Soon, the Purple Swamphens started coming out and they dotted the landscape like the chunky birds they are.


We started counting the Purple and Grey Herons as well as the Wandering Whistling Ducks and Philippine Ducks that started to come out into the open as the sun rose.


I was pleasantly surprised to see two Javan Pond Herons fly in to roost with the Black-crowned Night Herons.


As we rounded the bend, the sun came out bathing us and the landscape in a warm glow. It was such great weather for birding! It was nice and cool and made for no sweat birding.

I was tasked to count the duck species in the pond which I didn't mind since it was a good time to practice duck id skills. I scanned and scanned until my right eye got blurry from being closed too long.

We also checked out some empty rice paddies down the road. I was hoping for LOTS of waders but sadly, we only got a handful of Little Ringed Plovers and a couple of Common Sandpipers. We headed back to the ponds to complete our round. We got a better vantage point of the ducks and I continued my count and my scanning and we added Eurasian Teal and Northern Shovellers to our list.


After that yummy and re-energizing snack, I resumed my scan and found myself looking for ducks with orange bills. Our friends previously spotted a Mallard in the same area last month and I was hoping it was still there. Suddenly, I spotted orange bills! Three ducks among the Philippine and Wandering Whistling Ducks had orange bills! Not only that, I saw white speculums (colored patch on the wings) on them!

I called JC to check out the ducks on my scope and asked him to describe what he saw: orange lower bill, darker on the top bill; brown eyestripe; white patch on the wing, wings slightly raised from the body. I stared at my field guide as he was telling me the field marks he saw, and we both checked the plate and confirmed we were seeing female Gadwalls. Lifer! High five!!!

We called the rest of our team and we all got good looks at our shared lifer!


Later on, I reviewed my pictures and video and discovered that there was a male Gadwall too!


We moved along the road and Riza pointed out something hanging from a low branch. It was wings! Only the wings... and an already eaten head. We guessed it was the leftovers of the Harrier which has been frequenting the area.

Soon we were on the path towards the mayor's house. We joined Mike's team as they were headed back as well. Their count wasn't so good as their area, which was supposed to be ponds, have been converted to rice fields, yielding very little birds.


We gathered at the mayor's house to have some snacks and also to tally our counts. Our total for the year was 7,186 which was a bit higher than last year. It was a good count, but can definitely be better.


After the official count, most of us went back to twitch the Gadwalls. It was already noon and most of the ducks were sleeping and had their heads tucked behind the wings making it difficult to find them. After patiently searching, everyone in the group got to see them!

Here's a slow motion video of the male and female Gadwall we saw. They are the one's swimming on the upper part of the frame. Another female Gadwall pops into view while it is preening on the left side. Enjoy!