Sometimes, things just fall into place and happen. That's exactly what happened last weekend when Djop and I found ourselves riding on the wave of excitement that was the Puerto Princesa Underground River (PPUR) 4th International Bird Photography Race.

It was through the urging of Sir Alain and the sponsorship of MISLATEL and Netpoleon Philippines through Sir Roy that Djop and I were able to sign up at the last minute. We booked our flights and were soon flying to Palawan for our first bird race.

The 4th International Bird Photography Race was part of the Subaraw Biodiversity Festival - PPUR Day Celebration which is held every November 11 as commemoration of the declaration of the Underground River as a UNESCO World Heritage Site back in 2011. Subaraw comes from the words suba meaning "river" and taraw meaning "limestone cliff."

We arrived at Puerto Princesa together with a big contingent of birder friends who were also participating in the race and after a few photos at the airport were shuttled to the Princesa Garden Island Resort and Spa. The official start of the activities was still the Welcome Dinner affording us a whole day to go out and bird!

As soon as everyone "transformed" from traveller to birder, we were on our way! We first dropped by the Badjao Seafront Restaurant to check for any birds that may have been showing. The Spotted Wood Owls were seen the night before just by the parking lot! We were too early for the owls, and I guess, too late for the other birds. We decided to proceed to Atremaru Jungle Retreat Resort in Bgy. Buenavista, approximately a 1-hour drive from the resort.

Atremaru is a charming resort with cottages and trails offering great opportunities for birding. We were greeted by Palawan Flowerpeckers and Palawan Tits busily feeding in the trees around us. I spent most of my time at the balcony of the Carne Norte cottage and saw Hair-crested Drongo, Palawan Blue Flycatcher, Slender-billed Crow, and Palawan Bulbul.

Along the trail, the Palawan Tit put on a show while a peculiar tail-less Chestnut-breasted Malkoha made a brief appearance. More and more birders congregated at Atremaru and the birds continued to show. We were waiting for more birds to show when Sir Ramon and Cris told us that the Ashy-headed Babbler was showing quite well at the end of the trail. We headed there and true enough, a pair was skulking in the undergrowth. They flitted in and out of view in the shadows, not allowing us any good photos.

We decided to move to another area and headed to the Magarwak Ecopark. We checked out the hides for the Palawan Flycatcher and the Blue-eared Kingfisher, but it was too late in the day and the birds did not show. 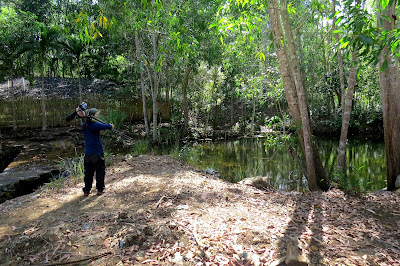 We boarded our van and headed to Viet Ville for a late pho lunch. After wiping out our meal, we headed back to Badjao Seafront Restaurant and try our luck with the owls. A group of international delegates to the race were already there and after a few minutes of waiting, the owls made their appearance. The light was already dwindling and the Spotted Wood Owls perched on the high trees, staying at the back while checking out the group of humans taking their photos. The owls soon flew off unseen and we headed back to our hotel for the Welcome Dinner.

The following two days were a blur! And my team wasn't really in competitive-mode for the race! I can only imagine the other teams rushing around Puerto Princesa, seeing and photographing as many birds as the can. Djop and I were on separate teams, and I went with Sir Alain, Sir Roy, and Ka Leny.

We went to a number of sites the next two days: back to Magarwak for the Palawan Flycatcher (success!)
We went back to Atremaru and enjoyed our non-competitive pace and ordered some coffee and eggs while waiting for the birds. We were rewarded by a brief but exciting visit from a Red-headed Flameback, plus some Fiery Minivets, a Hill Myna, and a Black-chinned Fruit Dove.
We then proceeded to the nearby view deck and spotted a thermalling Crested Serpent Eagle. We stopped by a beach area along the road but only saw a lone Common Sandpiper and a solitary Common Kingfisher. The view was great though. 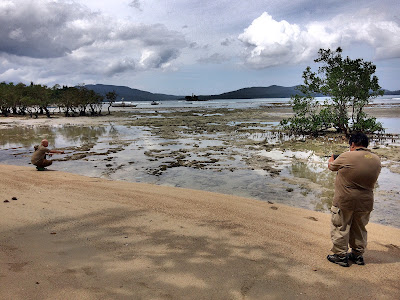 We headed back towards the city proper but stopped for lunch first at Pho Saigon. After another great Vietnamese lunch, we proceeded to the Crocodile Farm. Alas, the park was void of birds except for one juvenile night-heron. When no birds showed, we left and went to Irawan Ecopark where we hoped we would find the Melodious Babbler. Two of them approached us but stayed in the shadows, chasing each other but refusing to come out. We drove deeper into the park and stopped at the hides.

After checking out the Palawan Flycatcher, we made our way to catch the cockatoos and hopefully spot the frigatebirds that made an appearance the previous day. We positioned ourselves by the mudflats and after a short wait, heard the noisy flock of Philippine Cockatoos.


The following day we went to zigzag road and there got the Melodious Babbler! The bird sang and teased us with quick in-you-face views before flying off hidden again. A Spot-throated Flameback also showed on a high tree as well as a handsome Blue Paradise Flycatcher. (Thank you, Capt. Floyd and Atty. Carlo for the correction on the flameback ID =) )

We tried our luck with the Falcated Wren Babbler but no matter how close it was calling, almost to our faces, the bird did not show. A quick trip to Iwahig didn't give us any birds so we drove back to the hotel. I was happy to have some time for a quick afternoon dip in the pool before the closing dinner and the awarding ceremonies.

It was quite a different experience shared with friends and was able to make new ones as well. I rediscovered that I am not a competitive person, but I do admire those that engage in healthy competition. There are different ways we experience birds and nature and I am grateful to be given a chance to experience this bird race.

Thanks again to our sponsors MISLATEL and Netpoleon Philippines! Thank you, Sir Roy and Sir Alain! And congratulations to all the winners and participants. Birding in Palawan, race or no race, is reason enough to feel like a winner! =)