I think my life is one very long lesson in patience. And sometimes, I get rewarded handsomely.

I've waited for a chance to see Pied Avocets since I started birding in 2010. Every time I went to Candaba during migration season, I would hope for at least one of them to be there. Sadly, I wasn't that lucky a birder.

So when some of them were spotted in Obando, Bulacan by my friend Jasmin, my sleeping inner twitcher lifted her head, picked up her bins and said "Let's find 'em Avocets."


Maundy Thursday morning, Bob, Djop and I parked and started our walk under the scorching sun. Through the dried grass and the swarms of pesky insects that try to get into your mouth, nose, and eyes.

Walk on further, marching through narrowing dikes, and avoiding holes the boys would point out to me, making extra effort to remember if they said to keep left or keep right 😂

We stopped at a pond with lots of Black-winged Stilts and other waders and scanned for the avocets.

We also scanned the waders mixed with the stilts and egrets, hoping for the Dunlin or something else out of the ordinary. We saw Common Greenshanks and Marsh Sandpipers but nothing else. Then a couple of rust-colored waders popped up into view and I got my first views of Black-tailed Godwits in breeding plumage!!


At this point Mr. Sun was really shining down on us and with limited choices for shade, my hopes of seeing the Avocets was slowly draining away. We moved further into the fishponds and again through brambles and hidden holes until Bob said the words we were waiting for: "Avocets."

Maybe our expressions showed doubt and disbelief because Bob had to convince us a bit before we shared in his excitement and finally saw our lifers.

The boys went down the dried fishpond to find a better vantage point and some shade, but as I looked at the ditch I had to traverse, I gave them a firm "No, thank you." and made myself comfortable in my spot under the sun.

The Avocets were sleeping most of the time we observed them but they would raise their heads and preen now and then revealing their delicate upturned bills.

They were in a pond with quite a lot of terns so we scanned and spotted some Curlew Sandpipers that we really, really hoped would be Dunlins but they weren't, so...

There was also a lone Pacific Golden Plover, a Rufous-necked Stint, and a hiding Greater Sand-Plover also in its breeding plumage! Oh, an a handsome Gull-billed Tern as well.


After getting our fill of the Pied Avocets and the other birds, we decided to head back but not before taking photos of Black-winged Stilts that settled quietly in the pond behind us. 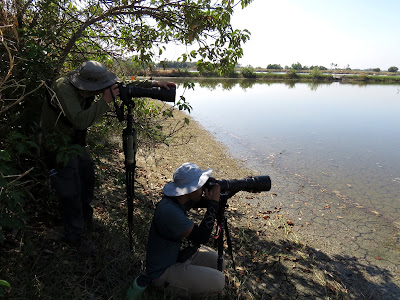 The walk back was hotter but easier because there was no longer any pressure to find the Avocets. We chanced upon a group of egrets and some waders and also a Javan Pond Heron.


So, we spent approximately two hours under the sun, traipsing through brambles and hidden holes but I finally got to see Pied Avocets! Here's a short video of my latest lifers and how far they were from where I stood 😉 Enjoy it in HD! 👌