One Nest at a Time

Birding the past few months has led me to see different nests. I have to admit that I don't usually see nests on my own and it's always a pleasant surprise when I see one (after it is pointed out to me.) The nests I've seen were located in different areas and habitats: from a trail in Bangkong Kahoy Valley to two schools in Quezon City. The birds have been hard at work! They have been through courtship and mating, building their nests, hatching their eggs and now raising their young.

I tried my best to document the nests I have seen the past month. I have missed a nest or two but here are some nests I've seen this year. 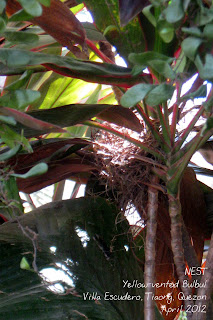 Yellow-vented Bulbul - I saw this nest by the reception area of Villa Escudero. Carmela pointed it out to us during a guided birdwatching trip we conducted there just last month. The young birds had just left the nest  a day before we arrived.

According to A Guide to the Birds of the Philippines (a.k.a. the Kennedy guide), the Yellow-vented Bulbul makes cup-shaped nests made from grasses and roots. The nests have been observed to be placed one to three meters from the ground and are fairly noticeable.

I remember last year, we found a YVB's nest in a low shrub in Jops' front yard! We could easily peer into the nest, which had three chicks at that time. 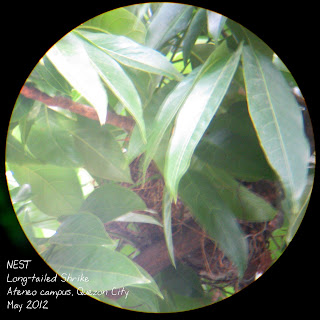 Long-tailed Shrike - During a birdwalk in Ateneo led by Trinket and Adri, the group found a nest of a pair of Long-tailed Shrikes. The tree it was built on was just beside the sidewalk and a very busy street, both with human and vehicular traffic.

According to the Kennedy guide, Long-tailed Shrikes build their cup-shaped nests "1 to 3 meters from the ground in hedge rows or low trees." This nest we saw was a bit high up, and cleverly covered by leaves.

We were able to observe the adult birds returning to the nest with some nesting materials and food. 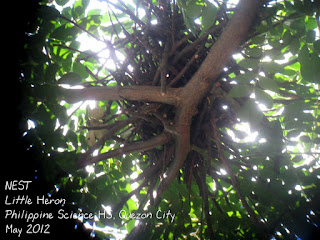 Little Heron - I did not expect to see the nest of this bird high atop a tree! WBCP friend Jon J. reported this nest which he saw in the Phil. Science HS campus. He was also able to document the adult bird on the nest! When we were in the campus for a guided trip, we saw the nest but it looked empty.

It looked like a heavy nest, made of quite large twigs instead of grass and straw. We did discover an eggshell on the ground below the nest. 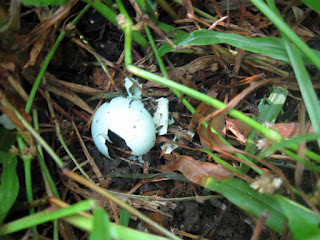 We went to the campus a day after it rained heavily in Quezon City. We're hoping that the egg didn't fall off the nest because of the downpour and that it had just already hatched. 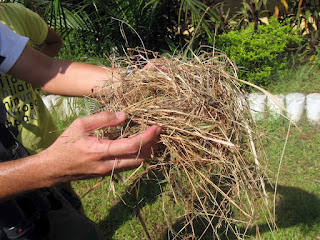 It was made from loosely woven stalks of dry grass. We had also seen some nests of the ETS tucked behind the letters of a restaurant along the NLEX. The Kennedy guide describes these birds to "nest in eaves of buildings" or in almost any crevice they can find. 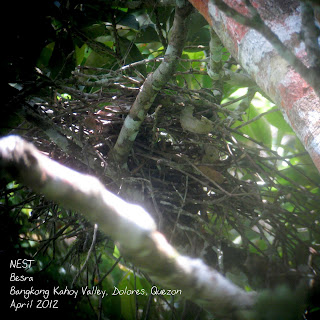 Besra - I didn't expect to see any raptor's nests anytime soon. But I did on our recent trip to Bangkong Kahoy Valley in Quezon.

According to the Kennedy guide, the Besra makes quite an untidy nest made of twigs. Yes, I agree with that. The nest looked loose and wobbly and also quite unfinished. But the female Besra was sitting in it and the bird looked comfy.

(The Little Heron's nest looked sturdier to me =P) 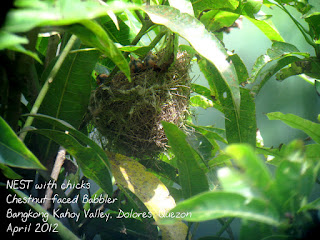 Chestnut-faced Babbler - This nest was nice and rounded at the bottom. It also looked like it was solidly anchored to the branches of the tree it was in.

It seemed big enough to house three chicks and when the adult bird sat on it, it was a "perfect fit!" 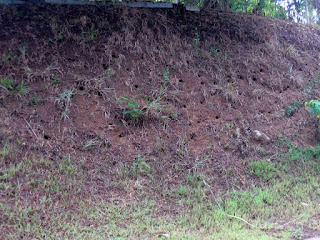 Blue-tailed Bee-Eater - These birds have burrows for its nests on sloping ground. We see them as simple holes on the ground. I just recently saw lots of them nesting holes beside a toll booth!


This picture is actually the sloping wall of a residence in Subic. The Bee-Eaters are all around, perching on the electric wires. 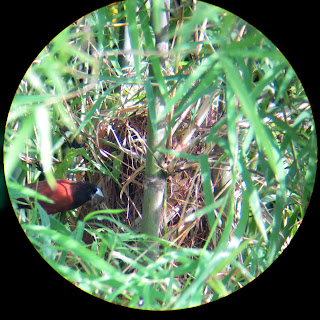 Chestnut Munia - The latest addition to my nest life list is that of a Chestnut Munia. We saw a munia carrying nesting material to a clump of dried grass nestled among the stalks of a thin bamboo clump. It looked like a loosely woven nest compared to the nests of other small birds.

What was interesting was that this nest was just beside the activity area of Anvaya Cove where there are bikes parked below it and beside it is a ping pong table which is constantly being used. 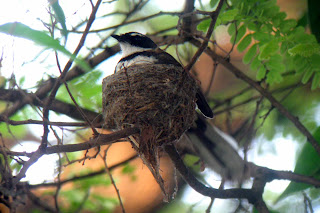 Pied Fantail - The Pied Fantails make fancy, hanging cup-shaped nests. The one I saw reminded me of a wine glass. The nest looks very sturdy and tightly woven. 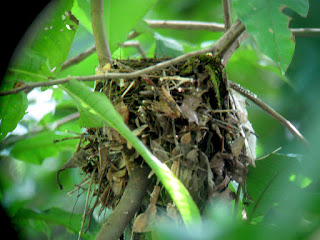 Ashy Ground Thrush - I had some difficulty seeing this nest, not knowing what I was looking for. It looked like a clump of wet leaves and twigs that got caught in the branches of a young tree. But it was a nest alright.

So far, I have also seen (but have not photographed) the nests of the following birds. Some I have seen a couple of years back! Good thing I wrote down some notes about them =)

I have previously started listing the nests I've seen. I have now officially started my "nest life list" as I am slowly adding to that list one nest at a time. And I look forward to seeing more! It's interesting to learn about the different ways birds build their nests and even more intriguing is the different "designs" bird's nests have. I prefer small bird's nests because they look more carefully made as compared to the larger bird's nests I've seen so far. But that can change when I get to see more nests!

I think I can safely say that discovering nests makes up for all the migrants leaving =) But I do miss the waders... =)
at May 11, 2012
Email ThisBlogThis!Share to TwitterShare to FacebookShare to Pinterest
Labels: birding in the Philippines, nests