After participating in the 14th TaipeiInternational Birdwatching Fair at the Guandu Park in Taipei, Jops and I signed up for the post-festival birding trip organized by the Wild Bird Society of Taipei (WBST.)

Initially, we were supposed to have a 3-day trip to the Kenting National Park which was way down south of Taipei. Kenting is a famous site for raptor watching but a few weeks before we flew to Taiwan, we received an email saying the Kenting trip was cancelled and would be replaced with a 1-day birding trip in the North Coast. Not a bad change in plans because it would give us a couple more days to go elsewhere. We planned to go on our own to the town of Wulai on our extra day and started asking our friends in Taiwan for tips on how to get there. Logistics and commuting directions were quite complicated so we just decided on visiting the nearer Yangmingshan National Park.

Come the day of the post-festival trip, we discovered within a few minutes riding our rented van that we were not going to the North Coast. Our guide, Pei Wan, was taking us to Wulai. =)

The Wulai Township is the largest and only mountainous township in Taipei County. It is surrounded by mountains and has become a popular tourist spot for their hot springs. Most of the inhabitants of Wulai are the Atayal aboriginals and the Ataya word “wulay” means hot springs. (Referenced from “Birdwatching in Taipei” by the Wild Bird Society of Taipei)

The drive to the Wulai Township was already a good place to do roadside birding. At our first stop to view a waterfall, some Grey Treepies were already seen. Further down the road, Pei Wan asked the driver to stop at a small slowing stream by the road and after some scanning, she pointed out to us our first Wulai lifer: a male Plumbeous Redstart flitting atop the rocks.

We drove a bit further and our other companions requested to stop at one of the waterfalls to take pictures. We saw another Plumbeous Redstart as well as some Black Drongos and a Grey Wagtail. Moving along, Pei Wan heard some bird calls in a wooded area. We all got out of the van and were treated to a very active mixed flock! We got a lot of lifers here: Grey-cheeked Fulvettas, Grey-chinned Minivets (both male and female), Japanese White-eyes, lots of Varied Tits, Taiwan Barbets, and even a small flock of Taiwan Sibias!

When the mixed flock moved further into the trees, we piled back into our van and drove to Fushan Village for a bathroom break in their very clean public toilet. While waiting for the others, some of us were walking along the bridge when I saw a huge black raptor thermalling just above the mountain ridge! Indian Black Eagle! And not just one Indian Black Eagle, but two! They were huge raptors with a very V-shape when gliding, with its wing "fingers" splayed upward. We watched them as they circled the sky above us and eventually thermalled in sync with each other as they disappeared behind the mountain. Pei Wan explained that the Black Eagle is the second largest eagle in Taiwan, the largest being the Mountain Hawk Eagle.

We were still gushing over the eagles when our Greek friend Eirini spotted another raptor on the other side of the bridge… this one was even bigger and more brown than black. Pei Wan exclaimed that we were very lucky: it was the biggest raptor in Taiwan, the Mountain Hawk Eagle!

When the raptors all thermalled away, we moved along as well and proceeded up the mountain. We got out at the end of the road and took a birding walk back down. We didn’t see any birds save for Light-vented Bulbuls and more Grey Treepies along the way but we did hear a Chinese Bamboo Partridge calling loudly from, yes, a grove of bamboos.

We drove towards Wulai Village to get lunch, stopping at a huge suspension bridge along the way. 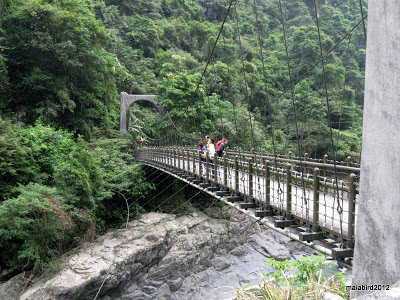 We were treated to a very, VERY delicious Wulai lunch made with the freshest vegetables from the mountains and fish and shrimp from the river =)

After lunch, we headed the Yaka Trail which is near Wulai Main Street. It was a relatively short uphill walk, passing by the elementary school and a cemetery, and the only birds we saw were a noisy flock of Grey-chinned Fulvettas. The forest was very quiet so we decided to head back down. On the last bend, I saw some movements in the undergrowth and after a bit of waiting, a couple of Streak-breasted Scimitar Babblers came out in the open! Such beautiful, beautiful birds! They are probably my favorite Taiwan lifer for that trip =)

As we approached the parking area beside the river, we heard this loud whistling call. Pei Wan started scanning the rocks in the river below us and there atop a huge rock was this big, almost metallic blue bird whistling away: a Taiwan Whistling Thrush! It hopped down to the water to bathe while we enjoyed watching it and listening to its call.

Just beside the huge rock was a smaller brown shape… could it be a bird? It moved! Yes! A Brown Dipper! We spent some time observing the bird, dipping its head and body and even walking around while almost completely underwater!

Pei Wan had to pry us away from the Dipper, as our companion Pong has a bus ride to catch in Taipei. We packed up and rode back to Chientan. We didn’t get to see loads of birds but we got excellent views of excellent birds on our one-day, impromptu trip to Wulai. I can't wait for my next chance to go back =)
at October 22, 2012
Email ThisBlogThis!Share to TwitterShare to FacebookShare to Pinterest
Labels: birding in Wulai, Brown Dipper, Plumbeous Redstart, Taiwan birding, Taiwan Whisting Thrush, Wulai